Do You Know How To Create Variables In Python?

Home » Uncategorised » Do You Know How To Create Variables In Python? 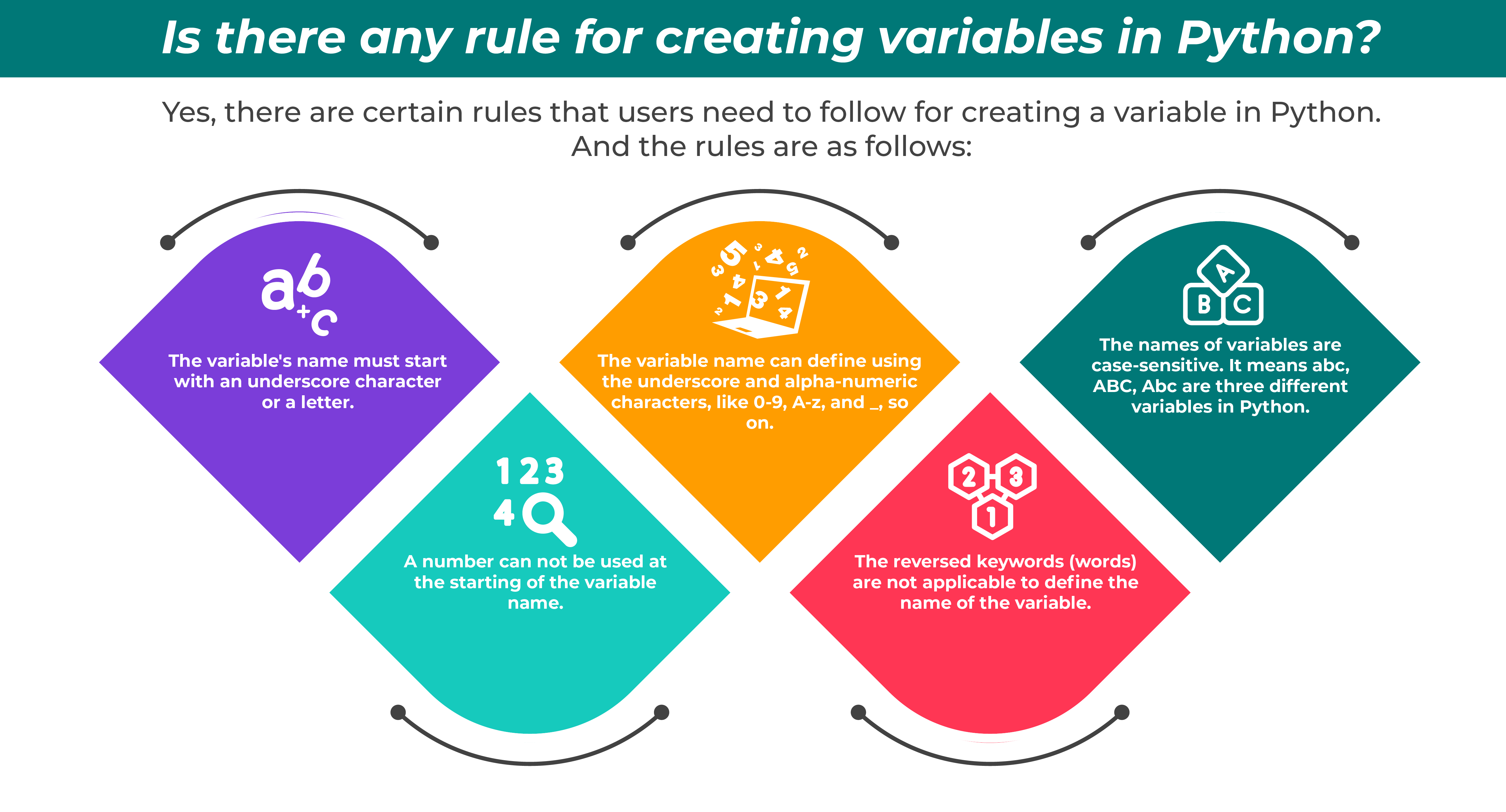 How to create variables in Python? Give examples?

This is a popular question that we often come across from Python beginners.

Python offers a controlled information kind of record as a real language. Firstly, the name “variable” suggests something that can easily be changed. The variable considers a method alluding to the specific memory location used by the PC programs.

The name of the variable can be emblematic that is specified to any physical area. Therefore, it is noticeable that variables play an important role in Python. Hence, it becomes necessary to know how to create variables in Python.

But before proceeding to the details, let’s take an overview of what are variables in Python. This will help the beginners to understand the variables efficiently.

What are the variables in Python?

A python variable is all about reserving the memory location that can easily store the values. In simple words, a variable in Python programs provides the data to a computer to process it effectively.

Each value present in Python has a specific data type, and each data type can be a List, String, Number, Tuple, Dictionary, so on. The variable in Python can be declared as a name or an alphabet such as b, bb, abc, and so on.

Example of types of Variable in Python

Data types are the categories and classifications of different data items. And it is used to represent the values that help you know operations that have been performed over specific data.

As we know, each thing in Python is considered an object, so data types are variables and classes of the specific classes.

Below are built-in or standard data types in Python:

A string that has Single Quotes:

NOTE: The list is used to represent the order sequence of the particular object with integer indices. So, a list is more suitable to use where you have some doubt about which variable is created for the particular value. Example:

It has been seen that list is a more convenient method than a dict for ordered sequences as list support iterations in the index order.

How to use variable key names to get the effect of variable variables in Python?

To create the variable variables in Python, the user can use dictionaries to store the values with the keys. Remember:  it is also possible to delete any of the keys: value pairs using the del.

If you store a value with the help of a key, which is already in use, then the previous value of that key will be replaced with the new value or forgotten. So, let’s check the effect of variables variable in Python.

Is there any rule for creating variables in Python?

Yes, there are certain rules that users need to follow for creating a variable in Python. And the rules are as follows:

Now, let’s check how to create variables in Python!!!

To know how to create a variable in Python, you need to use any numeric or alphabetical variable and specify a numeric value to it.

Let’s take an example of it (Code in Python 3):

How to declare and re-declare the variable?

Now, you know how to create variables in Python. Let’s check an example to declare a variable in Python and print it.

Now, let’s re-declare a variable in Python and print the relevant output.

Is it possible to assign a single or different value to multiple variables?

Yes, it is possible. How?

Using the “=” operator, the user can assign a single value to various variables. For example,

Python enables its user to assign a different value to multiple variables using the operator “,” for example

How to assign the new value or name to the previous variable?

If you use a similar name for the variable, it will give the new type and value as an output. For example:

Can I use the ‘+’ operator for different types?

No, you can’t!! But it does not mean that you can not use the ‘+’ operator. The below example helps you to understand how to use the ‘+’  operator.

Types of variables in Python: What is the difference between Local & Global variables?

When a user uses a single variable for an overall module or program, he/she needs to create the variable as a global variable.

But, in the case the user wants to utilize it for a particular function, he/she can use the variable as a local variable when the Python variable declares.

Let’s take an example to understand the difference.

2. Again variable x declares within the function with a local scope with the value”Hello World.” This has a different scope as that of global variables declared before.

3. When the variable is called, the local variable x will be eliminated. And it will print the value of “x” that is assigned as a global variable. That is x =50.

In the same vein, when the Python variable is declared with the help of keyword global, the user can declare it within the function.

Let’s check your knowledge of what you have understood in this blog!

2. Select the one which is not a valid variable name in Python?

3. Which of these statements is incorrect about variables in Python?

4. Which of these statements is incorrect?

5. Which of these is a valid variable?

Moreover, it is also necessary that the user must know how to create variables in Python. We are glad that we have provided all the necessary details about it with relevant examples. Hope you understand each example easily. So, keep on practicing and become the master of using variables in Python.

“PYTHON with IIT CERTIFICATION” BY GUVI

Immaterial of whether you are a beginner programmer or an advanced professional, GUVI courses will help you discover those hidden stairs to an advanced career, which you really expect from an institute when you step in. Learn more about GUVI and Python courses here.